This is Matt Duchene's road game worn sweater set 1 from the 2011-12 season. It was his second season as a pro and with the Colorado Avalanche.  The sweater has been photo matched several times to the numerous team repairs and stick mark on the torso of the jersey.  It was hardly a sophomore slump for Dutchy as he scored 27 goals and added 40 assists for 67 points, many of those points while wearing this sweater.. I look forward to many more years of Dutchy flying around the ice and scoring goals for the Avalanche. 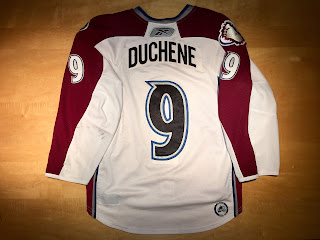 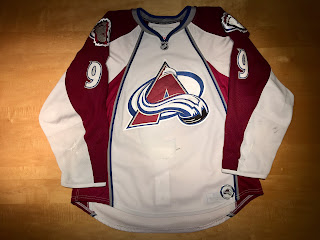 The photos below are three clear photo matches of Duchene wearing the sweater during the 2011-12 regular season.  The stick mark on front of jersey and team repairs on sleeves are clearly visible.. 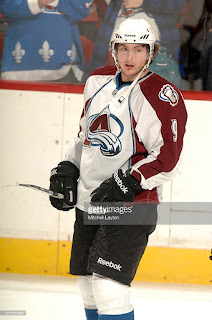 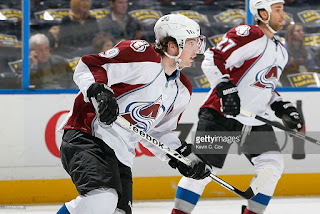 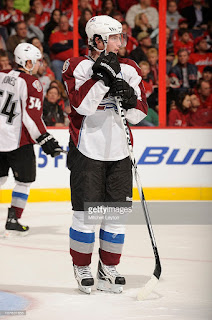 This is Greg deVries game issued set 4 playoff sweater from the 1998-99 playoffs..  This sweater is very pristine and most likely a backup jersey and was never worn in the playoffs so it the Avalanche LOA labels this as "team issued".  "Set IV" is written inside the collar on the Starter tag by the equipment manager.  The thing that makes this jersey so special and rare is that the Columbine High School memorial patch adorns the left sleeve.  The Avs wore these special patches in the Stanley Cup playoffs that year to honor the victims of the Columbine High School tragedy.  These Avs "CHS" patched playoff sweaters are very sought after by Avs collectors and have disappeared into collections.  This is a very special sweater to me in my Avs collection. 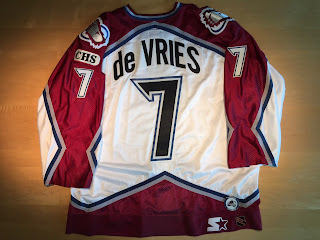 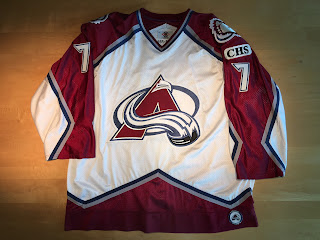 The Columbine High School memorial patch that was placed on the sleeve to honor the victims of the Columbine shooting.  Worn only in the 1999 Stanley Cup Playoffs. 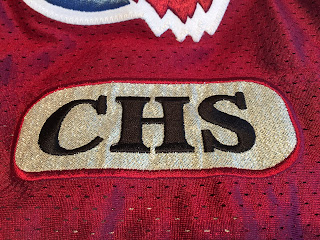 This is Chris Drury's game worn sweater from the Colorado Avalanche's Stanley Cup winning season of 2000-2001. It is his Set 1 road Koho sweater from the season. The jersey  exhibits very good game use, team repairs and stick and puck marks.. The sweater has customized sleeves for Drury and the 2001 NHL All Star patch adorns the right chest of the sweater. Drury was a fan favorite in Colorado as he was known for his clutch goal scoring, especially in the Stanley Cup playoffs.  Drury went on later to play for the Calgary Flames, Buffalo Sabres and eventually wore the captain's C for the New York Rangers. 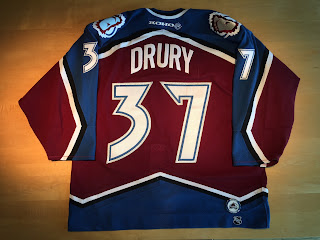 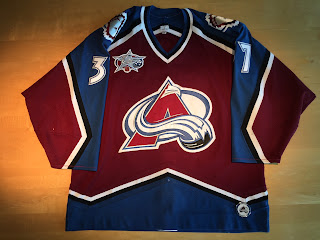 The sweater has the 2001 NHL All Star Game patch as well as the Colorado Avalanche Set 1 tag in the rear hem of the sweater. 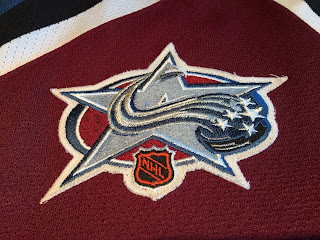 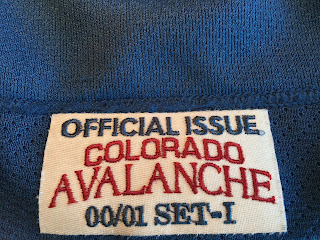 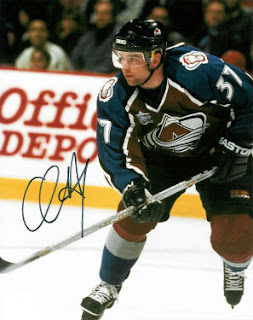